Fire accidents are very common these days, despite taking a lot of preventive measures. Installing Fire Alarm systems in your commercial buildings can be very helpful. A fire alarm system will detect the fire and send an alarming message that helps take immediate action to stop the fire. There are two types of an Alarm systems – Conventional Fire Alarm System and Addressable Fire Alarm System.

Whether you are planning to get a new alarm system for your building or update your existing alarm, you should first understand the two-alarm systems and the difference between them. Fire Alarms installation can be done better only when you understand it better. 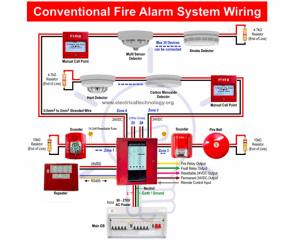 Just like the name suggests, the Conventional Fire Alarm system uses analog technology to communicate the signals. There are zones, initiating, and notification devices that are connected to a single control panel. Electric currents are used for the communication of the signals to the control panel. When environmental conditions in any given area increase above a specified threshold, then the flow of current in that particular circuit will increase. An alarm is communicated due to this change in the flow of current. 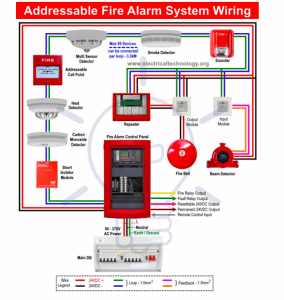 An Addressable Fire Alarm System works on the digital signal, unlike these Conventional Fire Alarm Systems. The device that is connected to the alarm will send signals in the form of binary code. That means the control panel will receive just zeros and ones. Different types of addressable fire alarms systems are designed to convey different information. So based on these signals, critical information is conveyed to the main control panel. You will gather a lot of information with a digital alarming system compared to analog systems.

Let us have a look at a few differences between the Conventional Fire Alarm system and Addressable Fire Alarm System:

The first and foremost thing that helps you understand the main difference between conventional and addressable fire alarm systems is their functioning. In Addressable Fire alarming systems, there is a dedicated address for every fire alarm. That makes it easy for you to track the fire accident’s exact location and take necessary action. The fire system will either activate water sprinklers or do the necessary action. But that is not the case with conventional fire alarm systems. The alarm system and the conventional fire alarm panel are connected with the help of wires. That means the exact location is hard to find. By the time you find the location and take any action, you will have to face many losses.

The installation’s purpose is another factor that can help you understand the difference between these two alarming systems. If you want the exact location of a fire accident, you should opt for the addressable fire alarms. But if the location is not your primary concern, then you can go for conventional alarm systems.

Now comes the important factor that helps you understand the difference between and make the right choice. An Addressable fire alarm system is easy to install and will also send pinpointed locations for saving a lot of lives. But it is the most expensive option. When it comes to a conventional fire alarm system, a lot of wiring is required. Along with that, you will need a lot of labor for its installation and testing. But the cost of this setup is less.

Your email address will not be published. All fields are required

Back to Top
Product has been added to your cart
Close